Writing on book 4, Wind of Change, but it is happening slowly as it’s CHRISTMAS TIME and Advent has begun.  I host several groups but do it all in one week and then I can kick back.  I had one church group Monday night, roast, potatoes and Grandma Elsie’s green beans, bacon, onions and all. Tonight is El Reno Bunco, fixing quiche. Tomorrow morning is CADW’s Cabinet meeting. Then I’m squeezing in a massage before Thursday morning CWF and then finish up with OKC’s Bunco Thursday night and also my sisters birthday here. Friday is Luke Combs concert with my best friend, Eilene.

Last night, Kelsie FaceTimed me and had some one on one with the twins  Three and a half months.

Hope you have a great Christmas!

Posted by Carol Nichols at 7:44 AM No comments:

Sweet Summer Rain has been published

Just a quick update. Sweet Summer Rain is now available on Amazon Books. I'm getting good reviews so I would appreciate it if you would place your review after you have had time to read. Reviews can be written at the same location of book purchase.

Hope you enjoy and let me hear from you. Your encouragement keeps me going.

Posted by Carol Nichols at 6:00 PM No comments:

Book Three, "Sweet Summer Rain" is at the editors and I'm writing Book four in my Season’s series, Wind of Change.

I can guarantee you one thing, Connie and JJ get married but, I, as well as you, are anxious to know where life leads these three couples.

I, also, would like to explain why, “Sweet Summer Rain” didn’t get published in August of 2018.

And that’s when my life stopped. My son, and it brings me to tears to say my son, Christopher Glen Nichols, was diagnosed with Calciphylaxis and given six months to live. Chris was at deaths door for the continual six months. His wife, Marilyn quit work to just be with him. He was in and out of the hospitals as his body fought the disease.

If you know me, I write my life. I cannot seem to write something I haven’t lived. So, the following was “Sweet Summer Rain” during Chris’ fight to survive dated February 2018 but wasn't published.

Weary and worn, I awake to the unthinkable.  How could this have happened, Lord? I rise and listlessly walk the usual path, indeed the ordinary steps of life I repeat day after day.  As I open the drapes and thank God for the sunshine instead of the miserable twelve-degree temperature of the last few weeks my heart screams out to God asking for understanding and for my friend as she faces the first day empty, alone and depleted.

Connie’s mind reverts to the happenings of prior days where her dear friend, Rosie, with dreams unrealized, barren and lost, watched as the tiny coffin was lowered into the ground.  Connie shivers and recalls as Rosie fell to her knees on the unyielding frozen earth removing her only son from her forever.

I do bible studies every morning and one was on Rahab and the red cord of protection she hung out her window. I said, Lord I can do that, and I hung a red ribbon in my front window.

Then I read about the woman with the blood issues and her healing after touching the hem of Jesus’ garment. So, I placed a white ribbon with the red.

The next was Jesus Calling and the gold cord of faith and hope. I placed the gold ribbon, and it curled around the red and white.

On September 3, 2021, Christopher Glen Nichols walked or as he said, strolled my last granddaughter to marry down the aisle in Sedgwick, Kansas. We all commented it was like a family reunion without going to a funeral. He felt remarkable. Was lively and joking, as always. Lots of pictures. Thank you, Lord for the pictures.

The kids left for a two-week honeymoon and one week to the day on September 10, 2021, Chris passed of a heart attack. I don’t remember much about the funeral, but I do remember the heartache of watching my only son’s casket being lowered into the cold dark earth.

On a brighter note. Trey and Kelsie welcomed twins, August 23, 2022. A boy and a girl. What blessings.

Back to "Sweet Summer Rain". I had the small excerpt mentioned above and that book over two thirds done when Chris seemed to be getting better. I stopped writing on it and about three years later I started another "Sweet Summer Rain", and the child lives but in real life the child doesn’t.

I knew I couldn’t be sad because of the blessing of my son being in my life, sooooo I took partial book one and partial book two and shuffled them together. I felt so good. So good because I could write what Chris did as a baby, like when he was asleep, I could move his bed and sweep under and around him and he never woke. These parts are my healing just as Book 1, "A Different Season", was my healing through Glen’s passing. I can tell you that I loved Glen with my whole body and soul but when it is your child it is a whole different pain. So, I thank you my dear sweet readers for letting me write for you. Your encouragement is beyond words, and I am anxious to continue the series with "Wind of Change".

Posted by Carol Nichols at 5:58 PM No comments: 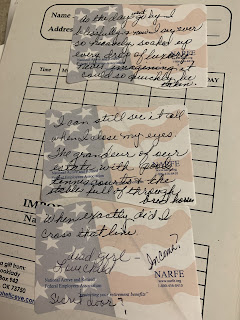 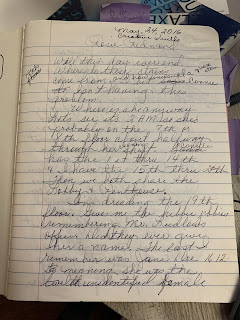 I forgot to post picture of my journal showing my first attempts.

Posted by Carol Nichols at 5:51 AM No comments:

Yet, one more season of my life!

I have been debating how to get this out to my book readers, so just gonna blog it.

My husband, Glen, passed in 2014. I started journaling, then putting my feelings on social media. My friends said I was making them sad. So I stopped. Then I saw a small ad in the local paper asking a simple question, "Have you ever thought about writing?"

I looked at Patches, my Jack Russell terrier, and said, "I believe I might give it a try."

The first day I went to the group, Creative Quills, was May 10, 2016, and you are asking, how I know the date for certain. Well, I was scared to death. I hadn't even brought writing material, but the sweet lady who started the class, Andrea Foster, quickly handed me a college composition book, the pen I managed to fish out of my purse. Thank you, Lord, for small favors. We wrote to music and I came up with nothing. A big fat zero. Andrea still reminds me that everyone in the class thought I would not return, but I did and on May 24, 2016, I once again sat meekly, only listening, and then...

Eureka, Andrea passed a box full of names and everyone took one. I drew, Rosie Redmond. I started writing, as I felt Rosie was an old friend. Just by holding that small strip of paper I immediately knew that Rosie was a scrubwoman in a high-rise office building and she had a friend named Sadie. The beginning of my first book and book 1 of my 'Season's Series' "A Different Season" was born. It was non-stop writing, and a lot of sticky notes I used to capture my every thought before I forgot. (Now I use my phone.) Book one was finished on August 22, 2016. I know now, that was in record time.

Andrea, anxious to promote each person set up an interview with a newspaper that sent a reporter. When it was my time, I said I was through with my first book, A Different Season, thus named because I am in a different season than all my other friends. But to my astonishment, I kept talking and said my second book is, "Mist of the Moment", third, "Sweet Summer Rain" and fourth, "Wind of Change" Wow, everyone turned and looked at me. Where did that come from? Then the lady next to me leaned in and said, "Oh, a season's series, nice." Well, no it wasn't, but thank you, now it is."

Book two, "Mist of the Moment" flew by much like "A Different Season". Then came book three, "Sweet Summer Rain."

This is where I will leave you for now, because the most difficult part to relate is the next season of my life.

Posted by Carol Nichols at 7:10 PM No comments:

Had a glorious trip to O'ahu and had to wear a mask on the flights, but during orientation on our first flight, they said that on April 18, 2022 CDC has removed the mask mandate on all planes and in airports, thank you, Lord.

We flew in on Friday, March 25th, and the Uber driver said there was to be a celebration in Honolulu at 11:59 and we should stay up so we did, and at 11:59 everyone throw their mask away. Facial freedom was liberating.

Posted by Carol Nichols at 4:24 PM No comments:

Hello everyone. Thank you so much for the likes and comments I've received. The Pandemic has opened up a whole different world for a lot of us. At least for me, it is strange being unable to dash here and there unconcerned and oblivious to any danger greater than the flu.
Streaming is all-consuming and six seasons of Longmire went quickly but looking for another Netflix high is near impossible. What has been your binge?
I did plant a small garden and the wonderful people at Ross' delivered my plants. The tomatoes and onion on my scrambled egg sandwich were the best. I want butter lettuce next year. At the other house, we had asparagus that had made its way from our neighbors and is only a fond memory now.
My little Jack Russell, Patches had a birthday last month and is fifteen but hasn't slowed down much. He loves keeping the squirrels in tip-top shape and a walk in the park is on his daily agenda.
Okay, it's your turn. Read any good books lately???
What's your go-to comfort food? I'm thinking goulash. Maybe not cold enough for goulash and fried potatoes just yet. I could handle okra though.
Great having this chat, so until next time wishing you all the best and sending prayers of protection for you and yours. God is good.💞
Posted by Carol Nichols at 8:49 PM No comments: